Wrapping Paper could be obtained:

Packs containing different amounts could have been bought with Donuts:

The Event Guide to the Minigame.

Battle of the B.S. Guide. 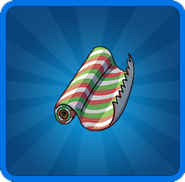 Wrapping Paper as Daily Challenge reward
Add a photo to this gallery
Retrieved from "https://simpsonstappedout.fandom.com/wiki/Wrapping_Paper?oldid=223810"
Community content is available under CC-BY-SA unless otherwise noted.