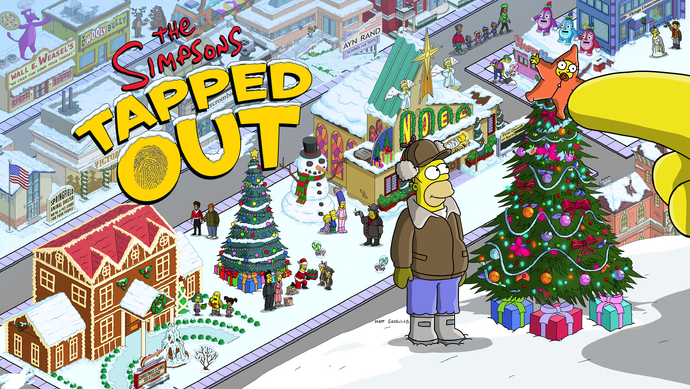 Winter 2015 Event was the eighteen major event released to The Simpsons: Tapped Out. It was released to all players on December 8, 2015, shortly after the release of the Springfield Heights Expansion (chapter two) update. It was the one hundred and sixth content update since the game's release, and the fourth of the Winter Events. With this update, Maggie was made available as a character, and Santa's Little Helper and Snow Monster were given a full set of jobs.

As usual, the event was divided into three acts, scheduled as following:

On December 23, Gil offered a short time deal of the Giant Snow Globe for 225 donuts.

In this event, there were two crafting currencies, Baubles and Bows, plus each act has a Personal Prize currency: Festive Hats (Act 1), Mistletoe (Act 2), and Pacifiers (Act 3). Loyalty Stamps were a currency both generated at and used to upgrade the Hot Squishee Station.

To win the crafting currencies, players had to tap Merrymakers, complete the Weekly Challenges and open or give presents.

Merrymakers appeared in the player's town and when tapped, the player was rewarded with three Festive Hats (Act 1) or Mistletoe (Act 2) plus one Bauble. When visiting their friends' towns during Acts 1 and 2, it was possible to drop presents, up to 5 a day. When tapped, an option appeared to choose if you wanted to be naughty (keep the reward to yourself) or nice (share the reward). When opening a received present, those two options also appeared, with different outcomes depending on the side both players chose. There was no way to get more than 5 presents to drop per 24 hours, and the presents refreshed at the same time as the players Friend Point counter refreshes.

After the update released on December 24th, each Merrymaker gave three Baubles and the daily limit of presents was raised from 5 to 10.

The player could also send Youngsters to Buy Hot Squishee at the Hot Squishee Station. Each task took 4h and rewarded the player with 2 Loyalty Stamps (4 for premium characters). Those were used to upgrade the Station and extend the tap radius of the Merrymakers or Imaginary Bears.

In Act 3, Imaginary Bears now replace Merrymakers and give 8 Pacifiers when tapped.

Act 2 was very similar to Act 1. To win Mistletoe, players had to tap Merrymakers, upgrade the Exotic Petting Zoo, Reindeer Burger Truck, Fortress of Lonelitude, and Moonshine Shack in the same fashion as the Best Snowman Ever and Gingerbread Mansion, and collect their income when fully upgraded, The Duff Center Arena and X-mas Trees Slightly Irregular also produced Mistletoe, as well as sending Sophie Krustofski and White Witch Burns on jobs. Each part of the main questlines also gave 100 Mistletoe.

Act 3 is different from the other Acts. Instead of tapping Merrymakers, players have to tap Imaginary Bears (which when tapped generates 8 Pacifiers), and Presents, Crafting, Weekly Challenges got removed. To win the Personal Prizes, players have to complete the questlines, send Maggie on Jobs and collect Income from Premium Buildings. After completing The End of the Beginning, a new minigame is unlocked. Hot Squishee Station still provided increased tap radius, and could still be upgraded.

The Gonna Find Out Who's Naughty or Nice quest line introduced the player to the Naughty or Nice mini-game, which was the primary source for Bows, the other being some of the weekly challenges. Each day, every player received 5 (and only 5) presents to drop into their friends' towns. The player could drop them all in one town or spread them over 5 different towns. The number was increased from five to ten presents on Dec 26, 2015. Presents were replenished with the Friend actions. Clicking on a present in the player's own town received a friend's gift. Presents were 2x2 decorations that disappeared on click and gave the choice of Naughty or Nice. Many players reported the presents hiding behind other objects in the town and suggested going to the move screen and hiding buildings to find possible missing presents.

While there was no way to know which friend gave you the gift before making the choice, all previous choices/exchanges with friends and their results were available by scrolling down below the Weekly Challenges on the Winter 2015 interface. The Naughty or Nice Results panel showed the player's overall statistics and the latest individual present results. The Leaderboard on the friend selection screen was given a temporary Naughty or Nice Leaderboard, which showed all results for the player's friends; a blue and red bar for each account'showed how often that player chose Naughty (red) or Nice (Blue). The total number of bows won for that account through the game was displayed to the right of the bar.

After completing The Decoration Inflation, players pick up Festive Hats in Act One or Mistletoe in Act Two by tapping Merrymakers or Pacifiers in Act Three by tapping Imaginary Bears, doing tasks at seasonal attractions such as Best Snowman Ever, and completing seasonal quests. After collecting enough, the player unlocks personal prizes.

Like in many previous major events, players were able to get bonus Donuts once they had unlocked the last prize in the current prize track. Every 4000 subsequent prize currency they were presented with 3 boxes containing either one, two or three Donuts. The boxes worked similar to the ones from the Bonus Levels. However instead of the usual 50,000 Cash, players had to spend 150,000 Cash to open another box. 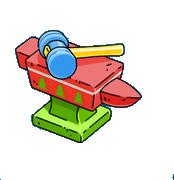 * only 5 are actually required

* in contrast to what the weekly challenge screen shows, the job is actually called Buy Cheap Trees for Squishee Filler

During the event, the Daily Play Combo rewarded event currencies instead of cash and mystery boxes.

The guide for Act 1 of the event.

The guide for Act 2 of the event.

The guide for Act 3 of the event.

App icon for the event.

The second loading screen for the event, used since December 24th
Add a photo to this gallery
Retrieved from "https://simpsonstappedout.fandom.com/wiki/Winter_2015_Event?oldid=225159"
Community content is available under CC-BY-SA unless otherwise noted.