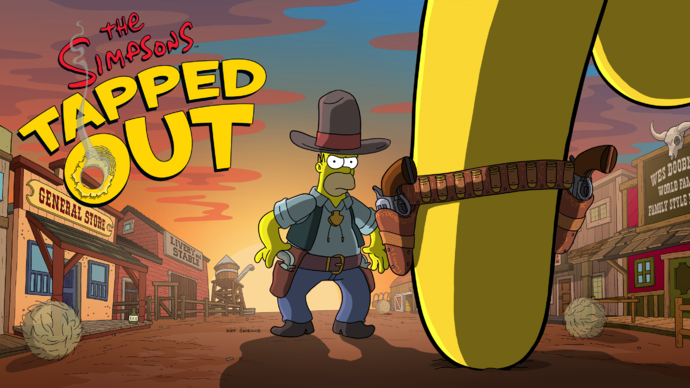 With this update, several permanent changes were made.

As with the most recent events, it was divided into three acts, scheduled as following:

With the event following the prize system introduced with the Treehouse of Horror XXV Event, several currencies needed to be introduced to keep track of players' progresses. We got one independent currency for each act prize track progress, those were: Clues (

Another group of currencies added, were the trade currencies, unlike the prize track ones this ones were available until the end of the event once introduced. Act 1 had only Pickaxes (

All currencies available in one act could be obtained from different methods.

Sending specific Springfielders to the Town Plaza, tapping Bandits, completing Daily challenges, and making exchanges at the General Store players can collect enough prize track currency to reach each each milestone and unlock the prizes.

During the event, challenges that followed its thematic, were added. This additions got priority over the usual Daily Challenges, and were the ones players always got unless a dismiss was used.

During the event, a Daily Challenge may require the player to find a special bandit and catch him. The player must tap him four times to complete the challenge, and after being tapped the first three times, he will try to escape, flashing red to indicate he'd been found. In comparison to other characters Wanted Bandits are bigger. They wear a cowboy had, but no shirt.

The guide for the event.

The guide for the General Store.

The guide for the story finale.

Introduction to quests being "stored".

New Free button that comes up in character job progress bars when the task is almost finished. 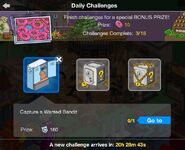 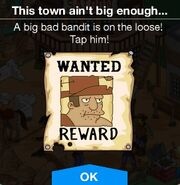 Big Bad Bandit before being tapped.

Big Bad Bandit running away and flashing red after being tapped.

Big Bad Bandit tied up after being tapped four times. 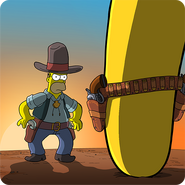 The event's app icon.
Add a photo to this gallery
Retrieved from "https://simpsonstappedout.fandom.com/wiki/Wild_West_2016_Event?oldid=235553"
Community content is available under CC-BY-SA unless otherwise noted.