Wiggops Bundle is a limited-time premium consumable that was released on October 3, 2018, as part of the Treehouse of Horror XXIX Event. It was a possible prize in the Magical Mystery Box (2018).

If the player already owns Wizard Bart, as it was a free costume obtained as part of the ThoH XXVIII Act 1 main questline Angelica Button and the Mystical Beasts, only Wiggops' Station with Wiggops becomes the alternative prize in the mystery box. 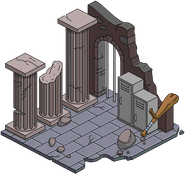 Wizard Bart
Add a photo to this gallery
Retrieved from "https://simpsonstappedout.fandom.com/wiki/Wiggops_Bundle?oldid=223636"
Community content is available under CC-BY-SA unless otherwise noted.