White Witch Burns is a premium, limited time costume for Mr. Burns released on December 8, 2015 with the Winter 2015 Event.

It returned on December 21, 2017 during The Invasion Before Christmas 2017 Event as an item purchased in the store. 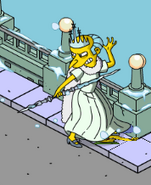 White Witch Burns casting a sleeping spell (on himself).

White Witch Burns sitting and brooding on a bench.
Add a photo to this gallery
Retrieved from "https://simpsonstappedout.fandom.com/wiki/White_Witch_Burns?oldid=237433"
Community content is available under CC-BY-SA unless otherwise noted.