The Secret Sauce to Success

Consumerism: +10
Wes Doobner's Rib Huts is a limited-time building released on April 19, 2016, as part of the Wild West 2016 Event. It was the ninth and final prize of the Event's Act 1. Upon completion Wes Doobner, a costume for Sideshow Bob is unlocked.

During a marathon commercial watching session, Marge catches an ad for a "Wes Doobner's World Famous Family Rib Huts" restaurant. With a menu that appeals to everyone in the family, they excitedly head out to visit the new restaurant that night, until they found out it was a trap set up by Sideshow Bob. 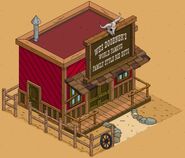 Wes Doobner's Rib Huts in the show
Add a photo to this gallery
Retrieved from "https://simpsonstappedout.fandom.com/wiki/Wes_Doobner%27s_Rib_Huts?oldid=226201"
Community content is available under CC-BY-SA unless otherwise noted.