The Secret Sauce to Success

Wes Doobner is a limited-time costume for Sideshow Bob released on April 19, 2016, as part of the Wild West 2016 Event. It was the ninth and final prize of the Event's Act 1.

...The [Simpson] family begins to sense that something is amiss when they see an empty parking lot and a restaurant void of any tables or chairs, once inside. The doors and windows close and latch behind them and Wes Doobner himself steps in through another door, emits a maniacal laugh, and reveals himself to be Sideshow Bob and gloats about his ingenious plan to trap and then kill the Simpsons.

Wes Doobner after completing a job 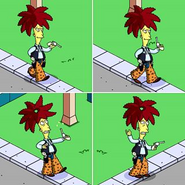 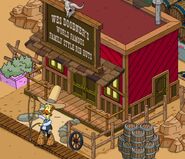 Wes Doobner in the show.
Add a photo to this gallery
Retrieved from "https://simpsonstappedout.fandom.com/wiki/Wes_Doobner?oldid=230959"
Community content is available under CC-BY-SA unless otherwise noted.