The Waverly Hills Elementary is a premium limited time building that was released on May 13, 2015, during the Mathlete’s Feat Promotional. It returned on August 4, 2015, during the third week of the release of the Springfield Heights Expansion.

It returned during the Spring Cleaning 2016 Promotion, where the player got a rebate of 40 donuts once purchased. 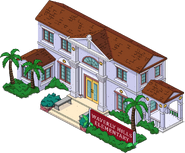 Add a photo to this gallery
Retrieved from "https://simpsonstappedout.fandom.com/wiki/Waverly_Hills_Elementary?oldid=183287"
Community content is available under CC-BY-SA unless otherwise noted.