The Volcano Lair is a premium building available since the original release of the game. Upon completion Hank Scorpio is unlocked.

The darker side of Globex Corporation is revealed in the form of a large "doomsday device" located in a large chamber under a mountain, which Hank Scorpio attempted to use to take over the East Coast, which he does. A reference was made to a Weather Control and Bacteriological Warfare division within the Globex Corporation.

The headquarters are powered by its own nuclear generator, once managed by Homer, who was a temporary employee until his family wanted to leave.

Inside the Volcano Lair 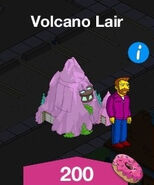 The Volcano Lair as it appears in the buildings menu, priced at 200 donuts.
Add a photo to this gallery
Retrieved from "https://simpsonstappedout.fandom.com/wiki/Volcano_Lair?oldid=216148"
Community content is available under CC-BY-SA unless otherwise noted.