The Valentine's Day 2014 Event was the seventh major event to be released for The Simpsons: Tapped Out and the second Valentine's Day themed event. It was initially released to all players on February 5, 2014, and ended on February 26, 2014; one day after the scheduled date. It was available to all players level 5 and over. The event included all new content, along with returning content from the previous Valentine's Day Event, such as Phineas Q. Butterfat's and Howard's Flowers. It is the only major event to date not to introduce a new limited currency, although Hearts were required to be collected in order for the player to play the Wheel of Friendship. They acted the same as spin tokens did in the Christmas 2013 Event.

This event introduced two new characters; Mindy Simmons and Brandine Spuckler. There were also two new buildings released, along with eight new decorations available to win on the Wheel of Friendship. The Valentine's Day 2014 Event was also the first event since the Whacking Day 2013 Event not to feature the prize system. On February 14, 2014 (Valentine's Day), the player was given a free I Choo-Choo-Choose You Train.

While players could visit their neighbors to gain more Hearts, they would find that when they visit friends nearer the end of their friends list, they would earn less Hearts. When players visited a neighboring town, in the bottom-left-hand corner of the screen there was a message that told them how many Hearts they would earn. It started off at five Hearts per tap, but after 30 actions it decreased to four Hearts per action. This diminishing return continued until the counter eventually got locked in at rate of just one Heart for the next 180 actions. After the 180 actions, players could no longer earn Hearts by tapping neighboring towns. The counter would reset after 24 hours. This counter did not affect the Hearts the player collects in their own Springfield.

There were some changes to the log in screen with the release of the event. Now on the initial log in screen there is a box in the bottom right-hand corner that displays the user's Origin picture, level and username. The add friend screen was also changed. players can now log into Facebook to see if any of their friends are playing and players can also see a list of all your friends on one screen. This screen also shows if they have received any friend requests or if they are awaiting a reply from a friend request. Clicking on a friends name in this screen allows one to see when they last played and you have the option to un-friend them. Neighbors' Springfields were reverted to alphabetical order instead of random.

The Wheel of Friendship was a new minigame released with the event. One spin costs the player 200 Hearts, and hearts can be purchased in packs from the store with donuts. The minigame is the same as the Holiday Wheel, released with the Christmas 2013 Event, except with different prizes. Some returning items are also available to win on the wheel, including the I Choo-Choo-Choose You Train and Valentine's Pond. Completion of the Wheel of Friendship will unlock the Tunnel of Love ride for Krustyland.

Below is a list of all the new content included in the initial Valentine's Day 2014 Event on February 5, 2014. Please note that after the event, some of the items listed may no longer be available:

Below is a list of content which was previously released with the 2013 Valentine's Event, and re-released for this event.

Players could gain Hearts by visiting neighbors and leaving cards. However, the amount of Hearts a player would receive varied by how many actions they had done that day. After 300 actions the player could not collect any more Hearts from neighbors that day, this does not include actions in the player's own town. This counter resets after 24 hours.

If the player logged in on February 14, 2014 (Valentine's Day), they received a I Choo-Choo-Choose You Train and the following dialogue:

There was a small update during this event for President's Day. From February 16–18 players that missed Abraham Lincoln and his Cabin during the 4th July 2013 Event had an opportunity to purchase them again for 150 Donuts.

The official app icon for the event. 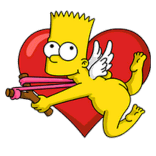 When a character received a Valentine.

The Snow Monster has a valentine.
Add a photo to this gallery

Retrieved from "https://simpsonstappedout.fandom.com/wiki/Valentine%27s_Day_2014_Event?oldid=244582"
Community content is available under CC-BY-SA unless otherwise noted.