Close Encounters of the Blurred Kind

Mr. Burns' medical treatment includes a weekly procedure which includes chiropractics, a painful vocal cord scraping, and an injection of pain-killers; its purpose is to postpone his death for one week. This makes his eyeballs grow to an unnatural size, and he becomes temporarily "nice." He also glows green, a result of working in a nuclear plant for ages. This once caused Homer to mistake him for an alien, though no one believed him, thinking him to have been drunk. Lisa tried to prove that Burns was not an alien, by pointing a flashlight at him, which revealed him in his "nice" form. The townspeople still believed he was a monster and wanted to kill him anyway, but Smithers rushed in and stopped them, explaining that it was really Mr. Burns.

*If Hibbert Family Practice is not owned, U.B.O. will use the Control Building instead. 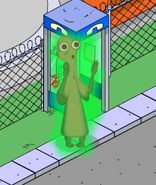 U.B.O. starting a sing along.
Add a photo to this gallery
Retrieved from "https://simpsonstappedout.fandom.com/wiki/U.B.O.?oldid=255384"
Community content is available under CC-BY-SA unless otherwise noted.