The Tribal Chief is a limited time premium character from the Thanksgiving 2013 Event. Once he is unlocked the quest God Bless Native America starts.

He returned on April 19, 2018 during The Springfield Jobs 2018 Event as a possible prize in the Monte Burns' Casino Mystery Box.

The Tribal Chief is the manager of Caesar's Pow-Wow Casino. After Bart snuck into the casino by hiding in Gabbo's box, he was brought to the manager. He told Bart that he would have a bad life if he carried on his deceitful ways. He even got Bart's name right, because Homer took out a second mortgage downstairs. Bart thought he was some kind of Indian mystic who could see the future, to which the manager coyly replied, "Who says I'm not?" He told Bart to throw a treasured possession into the fire to see his future. Bart threw a firecracker in and it exploded, causing the manager to become angry. Bart told him he bought it from a guy on the reservation and the manager said, "That's crazy talk!" When Bart insisted it was true, the manager clarified what he meant: "That's my brother, Crazy Talk. We're all a little worried about him." 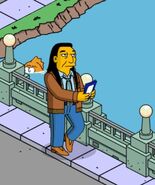 Tribal Chief handling out expired vouchers.
Add a photo to this gallery
Retrieved from "https://simpsonstappedout.fandom.com/wiki/Tribal_Chief?oldid=244511"
Community content is available under CC-BY-SA unless otherwise noted.