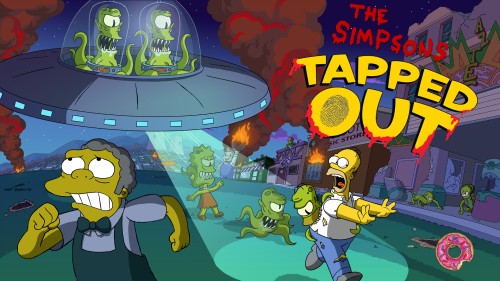 The Treehouse of Horror XXV Event was the 11th major event and the 3rd of the Treehouse of Horror events since the game's release. It was released on October 7, 2014, immediately following the end of the Clash of Clones 2014 Event. The Event was unique in that it had three different parts with a different prize track for each part. Each part was only available for twelve days.

The main quest for this Event was Free Hugs, the quest continued with The Whole Truth after the second set of prizes were unlocked and Alienation with the third set.

This Event also brought an update to the store. The new menu was much larger than the previous one. Clicking on the Characters, Buildings or Decorations section opens and reacts like before where players can slide it right and left to view items. A new way of sorting was also added with 3 icons: character, buildings and decorations. The Character icon showed any character that has not been unlocked; these include both individual characters and ones that come with buildings. The Buildings icon included businesses, houses, civic, and aspirational. The Decorations icon included land & roads, nature, walls, and leisure. The new store also recommended purchases, featuring items that would complete quests or the game just "randomly thought you might like this."

The player could also receive Ammo which was used in friends' towns to shoot down UFOs which the player received rewards from. Ammo is obtainable through Treat Bags, could be bought in the store, or received from the Ray Gun.

A leaderboard system was put in place. This gave players points based on how many Grem-Aliens players caught in their own towns as well as how many they placed in neighbors' towns. Each Grem-Alien players squished earned 15 points. Each one players placed in a friend's town earned 10 points, and if the friend didn't squish it within 4 hours players got an additional 20 points. If they did squish it in time, the friend got 15 points. The leaderboard could also be used to travel to other towns by clicking on the player's origin name.

This event added the ability to place the decorations from the Clash of Clones Event in Krustyland.

*Only available for purchase on Weekends.

For players who didn't own some or any of the returning content, some items were bundled together to make them cheaper for the player to buy.

A new feature added in the Event was the ability to craft prizes through a separate kind of currency. These items could be obtained mainly by sending kids (Bart, Lisa, Milhouse, etc.) on tasks to get Treat Bags that contain these items. Treat Bags could also be obtained randomly when squishing Rigellians, shooting down UFOs (which sometimes gave a quantity of a crafting item or 50 of the current Prize Track currency), or once a day from the Spooky House. Prizes could be crafted at the Make-a-Thing Workshop.

*Will only appear if it wasn't obtained when the respective currency for the items were available.

The following poll was open during the event, 3586 wikia users voted. What do you think of this event?

Lisa as a witch.

Milhouse as an astronaut.

Nelson as a hobo.

Marge the Witch as herself.

Ralph as a Canadian Mountie.

Squeaky Voice Teen as a character from Grease.

Shauna as a female devil.

Sherri and Terri as Grady's daughters from The Shining.

Kearney as the Joker.

Jimbo as Master Chief from Halo.
Add a photo to this gallery

During the event, Rigellians that roamed around player's towns could attack characters who were either doing a visual task or had no task. The aliens took over the character and morphed into the characters likeness. The following characters could be infested:

Wolfcastle
Add a photo to this gallery

Collect clothes to unlock Moog, a costume for Moe.

Answer Pretentious Modern Art to unlock Moog.
Add a photo to this gallery
Retrieved from "https://simpsonstappedout.fandom.com/wiki/Treehouse_of_Horror_XXV_Event?oldid=241899"
Community content is available under CC-BY-SA unless otherwise noted.