Treehouse of Horror XXVI Promotional is the twenty-fourth promotional for The Simpsons: Tapped Out. It was released on October 21, 2015. It ended on October 26th but players had until November 26 to complete the quest.

Treehouse of Horror XXVI is an upcoming episode of Season 27. In one of the segments of the episode, Sideshow Bob will kill Bart, only to not know what to do with himself after completing his mission in this segment "Wanted: Dead, Then Alive".

Other segments include "Homerzilla", a parody of Godzilla and finally the kids get superpowers in "Telepaths of Glory", Where the Simpsons kids gets superpowers based on their intelligence. 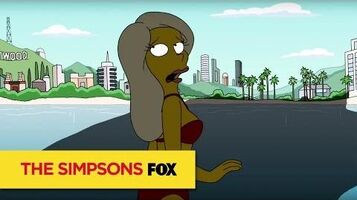 Add a photo to this gallery
Retrieved from "https://simpsonstappedout.fandom.com/wiki/Treehouse_of_Horror_XXVI_Promotional?oldid=225292"
Community content is available under CC-BY-SA unless otherwise noted.