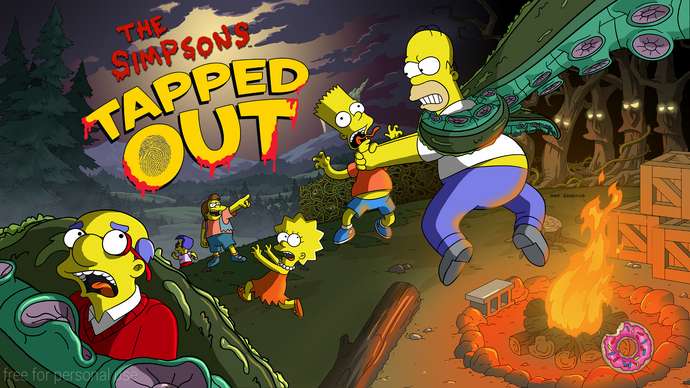 The Treehouse of Horror XXVI Event was the 17th major event and the 4th of the Treehouse of Horror events since the game's release. It was released on October 6, 2015 immediately following the end of the Oktoberfest 2015 Promotion. It ended on November 17, 2015. The Event had three different acts with a different prize track for each act.

The acts were scheduled as following:

The main quest for the first act was The Call of the Campfire, the quest continued with The Very Young Folk and The Springfield Horror in the second act. Finally, The Blameless City (and its prologue The Sandwich Horror) concluded the story in the third act.

The event included a Daily Challenges system called 'Shopkeeper's Challenges' in which the Player was allowed to complete certain tasks in order to get extra rewards in the form of event currencies. There were five challenges a week, and if the player could finish all of them, they were rewarded with 20 Donuts.

The event also re-introduced the ability to craft prizes as in past events. New items could have been crafted as each new act began, and stayed until the end of the event. Several items from past Treehouse of Horrors returned and could be crafted.

A special currency could've been collected and then released into neighbours' towns, called Formless Terrors. Players could tap these terrors in their own towns to receive currencies.

The event initially removed the Job Manager feature from the Office of Unemployment, however the feature was reinstalled with an update on October 22.

In contrast to previous events the progress bar for the personal prizes was reset to zero each time a prize was reached. Thus only the amount of currency required for the current prize is shown there. The currency counter in the lower left of the screen still showed the total amount of currency collected, though.

The possibility to craft items was reintroduced from events like Treehouse of Horror XXV, Superheroes 2015 or Terwilligers 2015. Each item required a specific act to have started and could have been crafted until the end of the event. Unique items did not appear if the player already owned them.

Beginning on October 12th the event introduced Shopkeeper's challenges (daily challenges) every week. One challenge was added every day for the first five days of the week. The player then had time until the beginning of the next week to complete all five challenges. If they did so, they were rewarded with 20 Donuts every week they complete all the challenges.

The challenges were accessed through the House of Evil, by tapping on the icon that showed on the top right of the game's screen or by opening the fourth main tab in the event's menu.

Squishing done in player's neighbour's Springfield counted toward the required amount when performed within the first 90 daily actions.

Previously fixed at 8am local time, the new challenges were available at 7am since the last hour change on November 1st.

The icon during the event.

The guide for Act 1.

The guide for Act 2.

The guide for Act 3.

The guide for the Daily Challenges.

The store banner for the event..

Gil's Sepulcher deal.
Add a photo to this gallery
Retrieved from "https://simpsonstappedout.fandom.com/wiki/Treehouse_of_Horror_XXVI_Event?oldid=219773"
Community content is available under CC-BY-SA unless otherwise noted.