Consumerism
The Paralyzer is a limited-time premium decoration that was released on September 13, 2017 during the County Fair 2017 Event. Upon tapping on it, the ride starts and gradually speeds up until one of the rocket cars breaks off and launches into the air. The rocket car then crashes into either Springfield Elementary, the Brown House, or Quick & Fresh. Both of the affected buildings will have a temporary facade where a burning hole will appear in either building. These buildings can be returned to normal appearance by either tapping them or exiting and returning to Springfield.

The Paralyzer in action 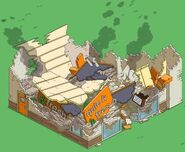 Quick & Fresh destroyed
Add a photo to this gallery
Retrieved from "https://simpsonstappedout.fandom.com/wiki/The_Paralyzer?oldid=239390"
Community content is available under CC-BY-SA unless otherwise noted.