It Happened One Event

The Jazz Hole is a limited-time premium building that was released on August 1, 2017, as part of the Homerpalooza 2017 Event. Upon completion, Bleeding Gums Murphy is unlocked.

It was re-released on August 21, 2019, as part of Act 3 of the Simpsons Babies 2019 Event. Together with Bleeding Gums Murphy, they were the fourth prizes to be won in the event's Act 3.

The Jazz Hole is a club where musicians play jazz. Bleeding Gums Murphy often plays his songs there and Lisa once took the family to listen to him. She returned to listen to some culture when she thought she was going to lose her intelligence. 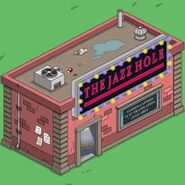 The Jazz Hole in the show.
Add a photo to this gallery
Retrieved from "https://simpsonstappedout.fandom.com/wiki/The_Jazz_Hole?oldid=257134"
Community content is available under CC-BY-SA unless otherwise noted.