The Homer (also known as "The Car Built for Homer") was a car designed by Homer when his half-brother, Herb, gave Homer a job at Powell Motors. It is a parody/exaggeration of the Edsel, a similarly disastrous automobile designed by Ford Motor Company. 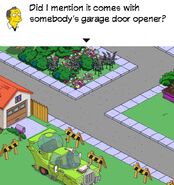 The Homer in the Simpsons: Hit & Run

Homer's reaction upon seeing his own creation.
Add a photo to this gallery
Retrieved from "https://simpsonstappedout.fandom.com/wiki/The_Homer?oldid=158453"
Community content is available under CC-BY-SA unless otherwise noted.