The Devil is a limited-time premium character that was released on October 12, 2018, as one of Gil's Deals during Act 1 of the Treehouse of Horror XXIX Event. He is unlocked upon the completion of the Hellscape.

The Devil, also known as Satan is in charge of Hell. The Devil sometimes manifests as Ned Flanders but has often manifested in other forms such as the Herman lookalike fawn in Season 2 (Old Scratch). His manifestation in Ned Flanders is sometimes considered as a separate character, Devil Flanders. He often appears in visons or dreams. Whenever Mr. Burns has a near death experience, Satan tries to get Burns there but continually fails. He appears in the music video Deep, Deep Trouble after Bart ends up with him. Bart was ordered to be reincarnated but as a snail. 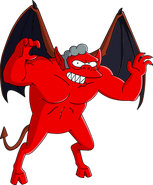 The Devil Enjoying a Breath of Fresh Air: sunbathing

The Devil Enjoying a Breath of Fresh Air: reading newspaper

The Devil Enjoying a Breath of Fresh Air: burning pigeon
Add a photo to this gallery
Retrieved from "https://simpsonstappedout.fandom.com/wiki/The_Devil?oldid=253898"
Community content is available under CC-BY-SA unless otherwise noted.