The Collector is a limited-time costume for Comic Book Guy that was released on February 24, 2015 during the Superheroes 2015 Event. He was the second prize of the event's issue 2.

He was re-released on June 14, 2016 for the Superheroes 2016 Event, unlocked for free upon completion of the Inch by Inch Pt. 1 quest. He returned again on September 12, 2018 during the Super Powers 2018 Event. He was a possible prize in the Mystery Box The Sequel. 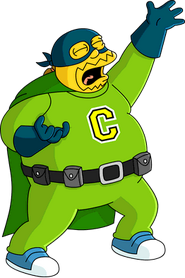 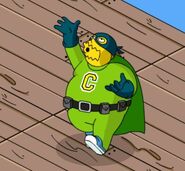 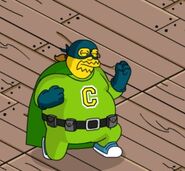 The Collector lamenting some more.

The Collector practicing swordsmanship with Nelson laughing at him.

The Collector battling a felon.
Add a photo to this gallery
Retrieved from "https://simpsonstappedout.fandom.com/wiki/The_Collector?oldid=222232"
Community content is available under CC-BY-SA unless otherwise noted.