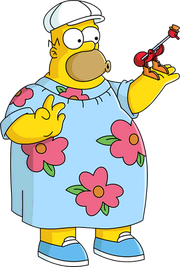 Thanksgiving 2015 Event is the 17th minor event and the 4th of the Thanksgiving events since the game's release. It was released on November 19, 2015 and it ended on December 1, 2015

During the event, turkeys appear in the player's town. One Turkey spawns every 20 minutes, until the maximum number of eight turkeys is reached. A new currency was introduced with the event, called Drumsticks. One drumstick is rewarded each time a turkey is tapped.

The event start with the quest Turkey Talk while the main quest is Gobble, Gobble, Toil and Trouble.

On November 23, when the players log on, the dialogue only quest Jacqueline Bouvier Recommendation will pop-up. Same thing happens on November 26 with the Happy Thanksgiving 2015.

On November 27, the Black Friday 2015 Promotion was launched in addition to this event. For it, Gil offered deals where donuts were given back after certain premium purchases.

* If the player has neither costumes, only the combo pack will be available for them.

Finding all 3 Easter Eggs will reward the player with a Cornucopia. The Easter Eggs are the following tasks that are highlighted in the character's job menu.

The guide to the event and quest. 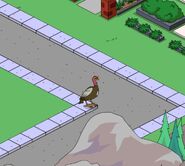 The Turkeys that appear in the player's town. 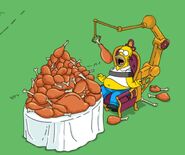 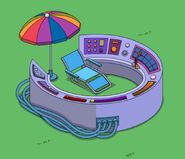 Too Many Turkeys Message

Add a photo to this gallery
Retrieved from "https://simpsonstappedout.fandom.com/wiki/Thanksgiving_2015_Event?oldid=241880"
Community content is available under CC-BY-SA unless otherwise noted.