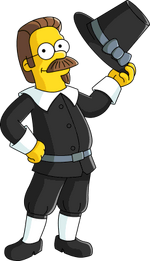 The Thanksgiving 2014 Event was the ninth minor event and the third Thanksgiving event to be released for The Simpsons: Tapped Out. It was released on November 20, 2014 along with the Covercraft Promotional and ended on December 2, 2014. The majority of the content released in past events returned during this Event as returning content, and the majority of the new content were premium items.

Below is a list of all the new content included in the event. Please note that after the event, some or all of the items listed are longer be available:

Starting on Black Friday (Nov 28, 2014), a new deal would become available every hour. Each deal lasted for one hour. On Cyber Monday (Dec 1, 2014) a new decoration item was released for 225 Donuts.

Stampy Parade Balloon.
Add a photo to this gallery
Retrieved from "https://simpsonstappedout.fandom.com/wiki/Thanksgiving_2014_Event?oldid=193844"
Community content is available under CC-BY-SA unless otherwise noted.