Herbs in a Hurry

Ted Flanders is a limited-time premium character that was released on July 17, 2019, as part of the Flanders Family Reunion 2019 Event. He is unlocked upon placing the Herbal Spinach Cart.

Ted Flanders is Ned Flanders' cousin. He is Episcopalian, which Ned finds disagreeable. He has two daughters, Bonnie and Connie. Although Ted lives at 740 Evergreen Terrace, which is only two houses down from the Flanders House, they rarely see each other. 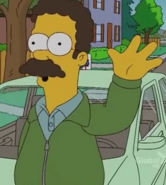 Ted Flanders in the show.
Add a photo to this gallery
Retrieved from "https://simpsonstappedout.fandom.com/wiki/Ted_Flanders?oldid=245737"
Community content is available under CC-BY-SA unless otherwise noted.