The Proclamation of Decoration

The Tasteful Festive Flanders House is an alternative façade for the Flanders House. It could be obtained during a quick quest released with the Springfield Heights Chapter 2, being a teaser about the Winter 2015 Event that would come the week after.

The façade originally has 2 candy canes on the front lawn, and lights lining the building, and several up the roof and across the sides. By the end of the quest line, the house has a huge star above the roof, strings of blue lights going up to it, presents on the garage roof and sides of the front lawn, a garland with huge bow above the front door, and many more lights. 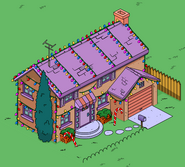 The skin released with the teaser of Winter 2015. 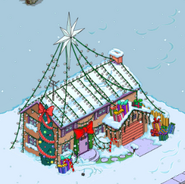 The final skin.
Add a photo to this gallery
Retrieved from "https://simpsonstappedout.fandom.com/wiki/Tasteful_Festive_Flanders_House?oldid=169685"
Community content is available under CC-BY-SA unless otherwise noted.