Hex in the City

Suzanne the Witch comes with the Gingerbread House which is the final prize in the Treehouse of Horror XXIV Event. Her resulting quest chain is Hex in the City (quest chain).

Suzanne, also known as the Wicked Witch, is a witch who lives in a Gingerbread House. She takes in Bart and Lisa after they are thrown into the forest. She fattens up Bart and makes Lisa clean. When she says that she has a date named George Cauldron, Bart and Lisa laugh. As a result, she tries to kill them only to be stopped by Homer. Homer gets transformed by a few spells before he throws her into the oven, cooking and killing her. Then George Cauldron comes to the door only to be told Suzanne will be another 20 minutes.

A promo picture of Bart, Suzanne the Witch, and Lisa.

Suzanne the Witch in the show

Suzanne invites children in for candy. 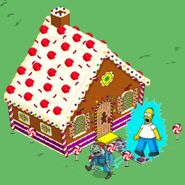 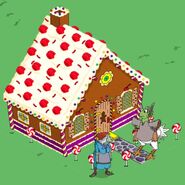 Suzanne the Witch Casting Wicked Spells (2).
Add a photo to this gallery
Retrieved from "https://simpsonstappedout.fandom.com/wiki/Suzanne_the_Witch?oldid=255280"
Community content is available under CC-BY-SA unless otherwise noted.