The Sungazer Studio is a limited-time building that was released on August 1, 2017, as part of the Homerpalooza 2017 Event. Upon completion, Peter D'Abbruzio is unlocked. Together with Peter D'Abbruzio, they were the sixth and final prize in the event's Act 1. 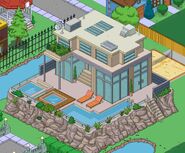 Sungazer Studio in the game.

Sungazer Studio's animation.
Add a photo to this gallery
Retrieved from "https://simpsonstappedout.fandom.com/wiki/Sungazer_Studio?oldid=253133"
Community content is available under CC-BY-SA unless otherwise noted.