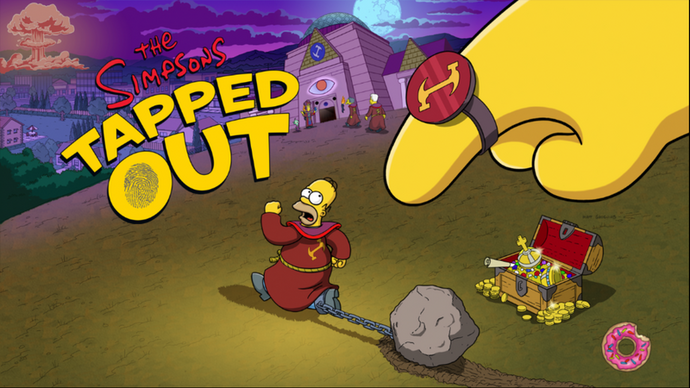 The Stonecutters Event was the ninth major event to be released for The Simpsons: Tapped Out. The event was made available to all players on June 3, 2014 and ended on July 2, 2014. The event introduced a new Currency, Emblems, which could be obtained from the All Seeing Eye, from the Chest of Sacred Artifacts, from "spying" on neighbors towns, from completing Number 1's Tasks and from tapping on The Order. Since it was a major event, a themed splash-screen and icon for the app were used.

The Stonecutters Event also reintroduced the prize system, which included 10 brand new prizes to be won by collection the Emblems. The bulk of the new items in the event were costumes for various different characters.The update also introduced two new features in the build menu. First, was the button that "hides" Road, pavement, and rivers, similar to how the buildings could be "hidden". It also introduced a new button that stored every single thing in a player's Springfield into their inventory but got rid of it a couple days after the update arrived.  The nuke button returned towards the end of the event.  The inventory was also updated so players could now find the buildings before the decorations, and also in alphabetical order. It also keeps on scrolling and doesn't stop until you stop.

Another feature that was added was the Town Census, that is accessed from Town Hall, which is a complete list of all the characters in your Springfield and what they are doing at the time, ex: being idle, doing a 4h job, etc. This allows for easy location of any character, instead of having to cycle through the character locate button until the character is found. Also, the Conform-O-Meter now shows the total bonus to Money and XP, adding the boost from premium decorations to the Conform-O-Meter bonus and displays the total to a hundredth of a percent (i.e. if you had Five Stars on your Conform-O-Meter and 52.50% from premium decorations, your total bonus would display as 57.50%).

Note: After getting all the Personal Prizes a "Bonus Prize" task unlocks where you can earn Donuts every 3,000 Emblems. If you do not get 3 Donuts on your first pick you can try again (much like the regular bonus levels after hitting the current level cap, but the extra tries cost 150,000 Cash).

One of the ways players could collect emblems was to complete Number 1's Tasks, which were various 1-2 hour jobs that various characters were sent on. A total of four jobs were available and every time a job was complete, a certain amount of emblems were collected, and the amount of emblems collected increased after each job. There were 4 ranks of jobs that reset every 24 hours.

The Sacred Parchment is the first of the personal prizes. When placed it gave the player the ability to solve riddles. Solving riddles earned the player emblems and after a certain number of riddles solved players could unlock new Stonecutter outfits and the grand prize, the Ark of the Stonecovenant. The prizes for the Sacred Parchment are listed below.

Below is a list of all the new content included in the initial Stonecutter 2014 Event on June 2, 2014. Please note that after the event, some or all of the items listed may no longer be available:

While many of the following are costumes, for the purposes of this event they are counted as characters and are in a character collection. The majority of the Stonecutter's do not have any outdoor tasks. The only ones that do have visible animations are; Number 51, Number 36, Number 50, Number 908, and Number 5.