Stampy is a character released on February 26, 2014, upon the removal of the Valentine's Day 2014 update. He was one of the five original rewards included with the friend point prizes system and is awarded once the player completes Friendship level 5.

Stampy is a rogue African elephant that Bart owned for a time. Stampy was later taken to a wildlife preserve to keep him safe. Bart won the elephant in a radio contest called "KBBL Wants to Give You Something Stupid." The listener was supposed to take $10,000 cash instead of the elephant (which was offered as a gag prize), but Bart caused a major uproar when he insisted on taking the elephant and was denied by the DJs Bill and Marty. KBBL management forced Bill and Marty to give Bart an elephant by threatening to fire them and replace them with a machine. Under the threat, the DJs got an elephant to give to Bart, and Stampy came to live with the Simpsons.

Stampy In the Show. 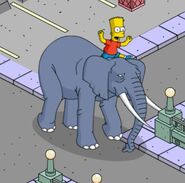 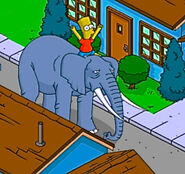 Friendship Level 5 prize
Add a photo to this gallery
Retrieved from "https://simpsonstappedout.fandom.com/wiki/Stampy?oldid=254643"
Community content is available under CC-BY-SA unless otherwise noted.