Stacy Lovell is a premium character released on May 28, 2015, along with the Level 53 update. She is unlocked upon completion of the Malibu Stacy Headquarters.

Stacy Lovell is the creator of the Malibu Stacy franchise.

She founded it, but she eventually was thrown out of her own company for ideas which weren’t cost-effective and for essentially committing treason against the United States during the Vietnam War by funneling funds to the Viet Cong. 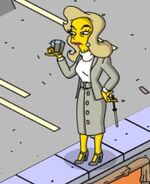 Stacy having a drink.
Add a photo to this gallery
Retrieved from "https://simpsonstappedout.fandom.com/wiki/Stacy_Lovell?oldid=255728"
Community content is available under CC-BY-SA unless otherwise noted.