The St. Patrick's Day 2013 Event was the thirteenth content update to the game. The update was released on March 7, 2013 to all players, and featured two new characters, a new building, a new decoration, and a new site. The water in player's Springfields turned green for the event - a reference to the green dying of the Chicago River for St. Patrick's Day in real life.

The questline for the update was St. Paddy's Day.

*The 50ft Magnifying Glass remained after the event finished.

*The Shamrock Topiary was unlocked by completing all of the St. Patrick's Day Tasks. You can only have one.

If the player logged into the game on St. Patrick's Day, March 17th, they received 5 donuts. 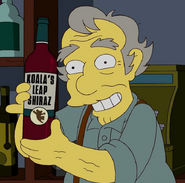 Leprechaun.
Add a photo to this gallery
Retrieved from "https://simpsonstappedout.fandom.com/wiki/St._Patrick%27s_Day_2013_Event?oldid=244584"
Community content is available under CC-BY-SA unless otherwise noted.