The Spooky Cabin is a limited time building released on October 6, 2015, during the Treehouse of Horror XXVI Event. It's the second prize to be won in the Event's Act One.

On October 4, 2016 it was re-released as a craftable item for the Treehouse of Horror XXVII Event. 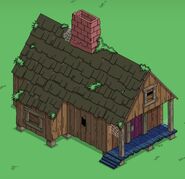 Spooky Cabin in a player's town.
Add a photo to this gallery
Retrieved from "https://simpsonstappedout.fandom.com/wiki/Spooky_Cabin?oldid=238734"
Community content is available under CC-BY-SA unless otherwise noted.