The Slime of Your Life Pt. 2

The Space Mutant is a character from the Treehouse of Horror XXV Event, he is given to players during the The Slime of Your Life Pt. 2 that requires the purchase of the Drive-In Theater. Once players finish his questline, they get 10 free donuts if they have purchased Krustylu Studios and Sideshow Mel.

It returned on October 3, 2018 during the Treehouse of Horror XXIX Event as a possible prize in the THOH Mystery Box.

The Space Mutant is from a long lasting horror movie series that usually plays in the Aztec Theatre or in the Springfield Googolplex Theatres.

The plot of all of the films usually revolves around the Mutants (from space) invading the earth and feeding on people. The film is most likely rated R (Restricted) for gore and sexual content seeing as how most of the people killed in the films are having sex at the time. 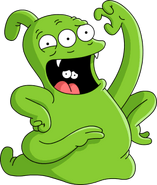 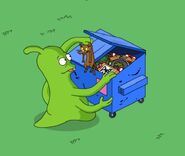 Space Mutant eating from a dumpster.

Space Mutant going on a RAMPAGE!

Space Mutants movie at the Googolplex in the show.
Add a photo to this gallery
Retrieved from "https://simpsonstappedout.fandom.com/wiki/Space_Mutant?oldid=245734"
Community content is available under CC-BY-SA unless otherwise noted.