Snowball II is a character that was released upon the end of the Valentine's Day 2014 update. She is one of the five original prizes included with the Friendship level system and is awarded once the player reaches Friendship level 3 and collects 1500 Friend Points. Tapping her will either make her sleep or cough up a hairball.

The current Snowball II is not actually Snowball V, it may get confusing because it looks like Snowball V, and also Lisa didn't want to get a new dish after the old ones were killed.

Other artwork of Snowball II. 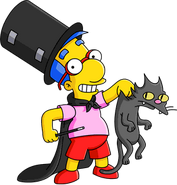 Snowball II With Santa’s Little Helper In the Show.
Add a photo to this gallery
Retrieved from "https://simpsonstappedout.fandom.com/wiki/Snowball_II?oldid=254638"
Community content is available under CC-BY-SA unless otherwise noted.