Snowball I is a limited-time NPC character that was released on August 21, 2019, as part of Act 3 of the Simpsons Babies 2019 Event. She was the third prize to be won in the event's Act 3.

Snowball I is a white cat and only briefly appears in flashbacks, but has been mentioned numerous times. She was the Simpsons' first cat and was five years old when she died. 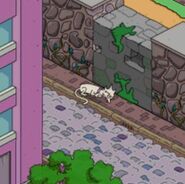 Snowball I when tapped (napping).

Snowball I in the show.
Add a photo to this gallery
Retrieved from "https://simpsonstappedout.fandom.com/wiki/Snowball_I?oldid=250574"
Community content is available under CC-BY-SA unless otherwise noted.