Smithers is a non-premium character released on January 11, 2013, along with the Level 25 update. He is unlocked upon completion of the Burns Manor.

Waylon J. Smithers, Jr. (better known as "Mr. Smithers" or simply "Smithers") is Mr. Burns' personal assistant, executive, and self-proclaimed best friend. He lived with Burns since he was an infant, and though partly raised by him, Burns never saw Smithers as a stepson, nor as an heir to his possessions.

In many ways, Mr. Smithers represents the stereotype of the closeted gay man, and numerous overt allusions and double entendres to his homosexuality are made (especially towards Mr. Burns), as he lives in the Gay Neighborhood. Smithers' loyalty towards his boss is often portrayed as exaggerated and superfluous.

He is deathly allergic to bee stings.

Other artwork of Smithers. 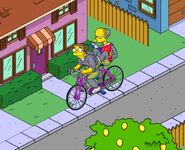 Smithers becoming a hideous drunken wreck/on his way to the police station to sleep it off in the drunk tank.

Add a photo to this gallery
Retrieved from "https://simpsonstappedout.fandom.com/wiki/Smithers?oldid=253519"
Community content is available under CC-BY-SA unless otherwise noted.