The Sky Finger Monument is a decoration that was released on February 27, 2019, as part of the State of Despair 2019 Event. It is available after Get to the Point Pt. 2 and its feature is available after starting part 4 of the same questline.

The Sky Finger Monument has a feature once Get to the Point Pt. 4 is started which enables it to collect the income from all the buildings and decorations that generates currencies in the player's town waiting to be collected. It can only be used once every 24 hours or it can be rushed for 72 donuts.

The icon that appears when it is ready to use. 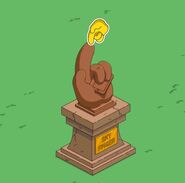 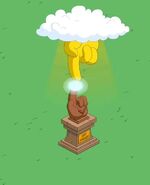 Sky Finger Monument getting activated.
Add a photo to this gallery
Retrieved from "https://simpsonstappedout.fandom.com/wiki/Sky_Finger_Monument?oldid=237100"
Community content is available under CC-BY-SA unless otherwise noted.