Sideshow Mel (born - age 36) is a premium character who comes with Krustylu Studios. He is Krusty's sidekick. He has 7 jobs in total, one of which requiring the Cannon, which is a premium decoration priced at 20 Donuts. Once unlocked, Mel is placed under the C-List Celebrities character collection.

He was part of a deal with the Krustylu Studios during the Black Friday 2015 Promotion.

Melvin Van Horne (aka Sideshow Mel) is Krusty's current sidekick on The Krusty the Clown Show. When not in character, Mel speaks in a grandiose British/Shakespearean accent and owns poodles.

Sideshow Mel doing the job 'Blast From the Cannon'.

A message shown during the Clown in the Dumps Promotional, promoting his purchase. 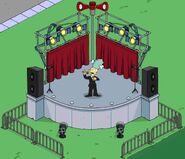 Sideshow Mel blasting from the cannon.
Add a photo to this gallery
Retrieved from "https://simpsonstappedout.fandom.com/wiki/Sideshow_Mel?oldid=255348"
Community content is available under CC-BY-SA unless otherwise noted.