Sideshow Bob is a unique, non-controllable character in The Simpsons: Tapped Out. There is a 10% chance of him randomly appearing in the player's Springfield.

With the Terwilligers 2015 Event, he could be obtained as a controllable character by completing the Blessings of Guilt quest. In this case the non-controllable version of him doesn't appear anymore in the player's town.

Since the end of the event, he can be obtained anyway by completing the Flaw and Order questline if the player didn't get him during the event.

Robert Underdunk Terwilliger, Jr., better known by his stage name, Sideshow Bob, which he got when he was Krusty the Clown's sidekick. Bob is a self-proclaimed genius, member of the Republican Party, champion of high culture, former children's sidekick entertainer turned criminal mastermind and Bart Simpson's nemesis. He loves Gilbert and Sullivan Operettas and is known for his huge feet, which have gotten him into trouble on more than one occasion.

Sideshow Bob is a unique character. He cannot be controlled, but he can be obtained by the player. In the game, there is a 10% chance of Bob appearing randomly, the game claiming that he had escaped from imprisonment. Upon his appearance, Bob will run among the player's Springfield. The player must then tap Bob to apprehend him before he seeks shelter in a building.

Upon apprehending Bob, the player will be awarded a small portion of experience, along with a boost to the Righteousness category of their Conform-O-Meter.

Sideshow Bob will first appear in the player's Springfield at Level 6 along with a task, and will then randomly appear from then on. 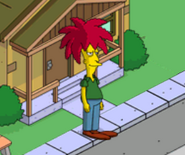 Sideshow Bob as he appears in-game. 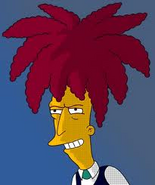 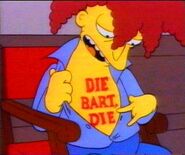 Sideshow Bob's clever plan as dressing up as Wes Doobner to try to kill the simpsons
Add a photo to this gallery
Retrieved from "https://simpsonstappedout.fandom.com/wiki/Sideshow_Bob_(non-controllable_character)?oldid=255300"
Community content is available under CC-BY-SA unless otherwise noted.