The Shotkickers is a building released on with the Level 54 update on June 17, 2015. Upon completion Ruth Powers is unlocked.

Shotkickers is a country bar located near Springfield. Shotkickers features country-western music, line dancing, and a mechanical bull, in addition to serving the customary assortment of drinks. It also has a rowdy clientele, but at least some of the men are also gentlemen at heart. 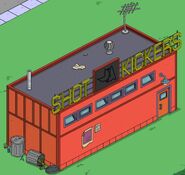 Add a photo to this gallery
Retrieved from "https://simpsonstappedout.fandom.com/wiki/Shotkickers?oldid=243007"
Community content is available under CC-BY-SA unless otherwise noted.