A Spoonful of Bitter

Shary Bobbins is a character released during the Easter 2014 Event, and could be won in the Gold Easter Box.

Shary got re-released during the Easter 2015 Event and Secret Agents 2017 Event at a cost of 125 Donuts.

She returned on March 28, 2018 during the Resurrection of Rigellian Christ 2018 Promotion.

After discovering that she is losing hair at an alarming rate, Marge decides to hire a nanny who can help relieve her of some chores. They start interviewing several candidates, but none of them are right for the job. Bart and Lisa sing a song about what they would consider the perfect nanny, and their wishes are answered when a woman with an umbrella glides down from the sky and introduces herself as Shary Bobbins.

Shary Bobbins flying on her umbrella 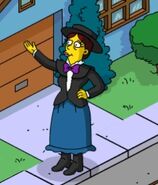 Shary Bobbins flying on her umbrella.
Add a photo to this gallery
Retrieved from "https://simpsonstappedout.fandom.com/wiki/Shary_Bobbins?oldid=255731"
Community content is available under CC-BY-SA unless otherwise noted.