Shadow Knight was a premium limited time costume for Bart released on October 2, 2014, during the Clash of Clones 2014 Event. Purchasing Shadow Knight's Throne unlocks this costume. Once this costume is unlocked the quest Metagaming begins.

The Shadow Knight is Bart's character in Earthland Realms.

Cleric first met the Shadow Knight in the game when he attacked a small village. Alf and Moe filled her in on who the Shadow Knight was; he then killed Turkey Skinner with his flame sword. When Marge discovered he was really Bart she was shocked that he was so violent but happy that her son played the game well.

Shadow Knight on his Throne, drinking his troubles away.

Shadow knight in the show 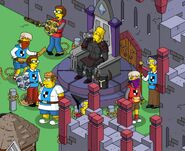 Shadow Knight questioning his existence.
Add a photo to this gallery
Retrieved from "https://simpsonstappedout.fandom.com/wiki/Shadow_Knight?oldid=256307"
Community content is available under CC-BY-SA unless otherwise noted.