Sequel Stop is a limited-time building that was released on December 24, 2014, during the Christmas 2014 Event Part 2 as one of the prizes available.

It was re-released as a premium item for the End of School Promotion 2015 content update where its income and building time were changed to premium rates.

Sequel Stop is a game store in Springfield where Bart Simpson attempts to buy a videogame called Grand Theft Scratchy from Squeaky Voice Teen, using a Cal-Calzone Zone Card as a legal ID, only for the game to be snatched out of his hands by Marge when she catches him with the game.

Sequel Stop in The Simpsons Game. 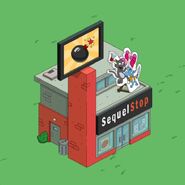 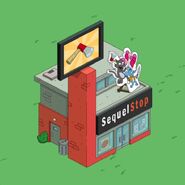 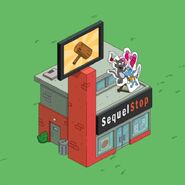 Sequel Stop's animation (mallet).
Add a photo to this gallery
Retrieved from "https://simpsonstappedout.fandom.com/wiki/Sequel_Stop?oldid=250604"
Community content is available under CC-BY-SA unless otherwise noted.