Selma is a non-premium character released with the Level 35 update on September 13, 2013 along with her sister, Patty. They are both unlocked upon completion of the Spinster City Apartments.

Selma Bouvier-Terwilliger-Hutz-McClure-Discothèque-Simpson-D'Amico (née Bouvier) is one of Marge's older chain-smoking twin sisters, who works at the DMV and possess a strong dislike for her brother-in-law, Homer. Selma is the adoptive mother of Ling. 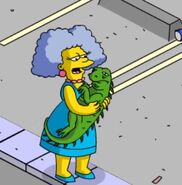 Selma cuddling Jub-Jub.
Add a photo to this gallery
Retrieved from "https://simpsonstappedout.fandom.com/wiki/Selma?oldid=256973"
Community content is available under CC-BY-SA unless otherwise noted.