The Scratchy Mascot is a premium character which was released with the Krustyland Expansion update. This character can be purchased for 60 donuts and will only appear in Krustyland.

When he is tapped on he throws knives down his throat and says one of the four quotes: 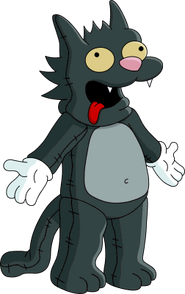 Scratchy Mascot in the show.
Add a photo to this gallery
Retrieved from "https://simpsonstappedout.fandom.com/wiki/Scratchy_Mascot?oldid=252710"
Community content is available under CC-BY-SA unless otherwise noted.