It returned on February 27, 2019 during the State of Despair 2019 Event as a possible prize in the Ballot Box Mystery Box. 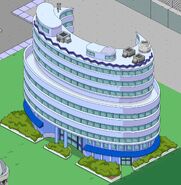 Add a photo to this gallery
Retrieved from "https://simpsonstappedout.fandom.com/wiki/Scandal-Gate_Hotel?oldid=230816"
Community content is available under CC-BY-SA unless otherwise noted.