He returned on December 8, 2016 during the Winter 2016 Event. This along with Santa's Village were part of the Santa Skin Bundle.

He since has returned on November 29, 2017 during A Rigellian Christmas 2017 Promotion and on December 5, 2018 during A Simpsons Christmas Special 2018 Event as part of the same bundle.

Ned decides that he will be the most appropriate Santa this Springfield has ever seen. However he becomes too religious and starts preaching about angels blowing trumpets, announcing to the multitude the good needs that on this day. Marge then tries to teach him how to be a Santa that everyone can enjoy. 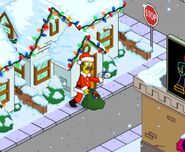 Santa Flanders delivering presents
Add a photo to this gallery
Retrieved from "https://simpsonstappedout.fandom.com/wiki/Santa_Flanders?oldid=242084"
Community content is available under CC-BY-SA unless otherwise noted.