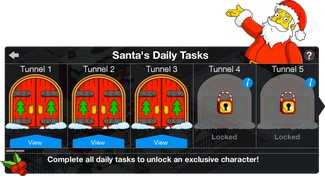 During the Christmas 2014 Event daily tasks were unlocked known as Santa's Tasks. These tasks became available to the player once they built the Elf Cave. Each day, a new Tunnel was unlocked in the Elf Cave. Each Tunnel had a set of prizes (1 Item, 1 Elf, and a Bonus 100 Presents) and three tasks that needed to be completed to earn the prizes. Each players prizes depended on which items they already owned from previous Christmas Events. If the player already had an item from the previous Event, then the reward for that Tunnel would be a new item from this Event. If not, then the player go the returning item as the prize.

When all tasks for all days are complete, the character Zutroy is placed in the player's inventory.

These tasks were similar to Number 1's Tasks from the Stonecutters 2014 Event. Once the player finished all three tasks, the prizes were placed in their inventory. There was also an added Bonus to each Tunnel; if the player was able to complete all three required tasks within 24 hours of beginning the first one, then they got a Bonus of 100 Presents. Even if all three tasks weren't completed within the 24 hours, they could still be finished afterwards and the prizes could still be won, just without the bonus.

Here is a list of each Tunnel from Part 1 unlocked during the Event, and each of its prizes, tasks, and times:

Retrieved from "https://simpsonstappedout.fandom.com/wiki/Santa%27s_Tasks?oldid=181004"
Community content is available under CC-BY-SA unless otherwise noted.