The Simpsons: Tapped Out Wiki
Register
Don't have an account?
Sign In
Advertisement
in: Characters, Premium Characters, Limited Time,
and 12 more

Roscoe is a premium character, which was available as a Gil deal during the Pride Month 2015 Event and returned during the Homer's Chiliad 2016 Event. He was unlocked upon completion of the Ajax Steel Mill.

Roscoe is a homosexual man who runs the Ajax Steel Mill. When Homer and Bart visited the steel mill (as part of Homer's effort to make sure that Bart was straight), Roscoe told them that the workers worked hard and played hard. Roscoe then pulled a chain which made music play and a disco ball come down from the ceiling, and the workers (who were all gay) started dancing with each other. Homer then ran away from the mill, taking Bart with him.

Roscoe dancing at the Steel Mill. 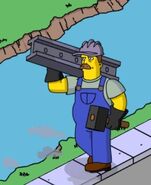