Roger Myers Jr. is a character that was released with the Level 42 update in June 2014. He is the owner of Itchy & Scratchy Studios.

Roger Myers Jr. is the CEO of I&S Studios, and is the son of Roger Meyers, Sr. He distributes the cartoon, which is frequently criticized by parents because of its violent nature.

He is a jaded and selfish businessman who has nothing but contempt for the children who comprise his audience. When I&S Studios is bankrupted following their trial against Chester J. Lampwick, when Bart and Lisa are too late in providing information that could save the company, he tells them condescendingly, "Great, mail it to last week when I might have cared. I've got cartoons to make." 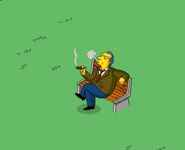