Rod was a limited-time non-premium character that is available at level 32, along with his brother Todd. He is unlocked upon building Sir Putt-A-Lot's, a building which was added to the game again after initially being introduced as a limited time item for purchase during the Valentine's Day 2013 Event.

Rodney "Rod" Flanders is the elder son of Ned Flanders and Maude Flanders.

Rod often prays, first thing in the morning and last thing before going to bed. He prays for God to watch over him and his little brother, Todd. He prays for the success of his father's business. He also prays for the success of all Christians, but due to his upbringing does not respect people of other (or no) faiths. Aside from praying, Rod enjoys playing with Todd and eating lots of "Nachos, Flanders-Style"(cucumbers with cottage cheese). His one regret is that he can't pray at school.

Rod's favorite songs are "Bringing In The Sheaves" (followed closely by "Noah And The Arky-Arky") and "I've Got The Joy, Joy, Joy, Joy Down In My Heart."

Rod has diabetes and has described being quiet during trips as one of his favorite hobbies (including clapping during songs).

Rod possessed by a ghost during the Treehouse of Horror XXIV Event.

Rod and his brother Todd.

Rod's Halloween costume during the Treehouse of Horror Events

Rod and Todd playing on the see-saw.

Rod swinging on the monkey bars. 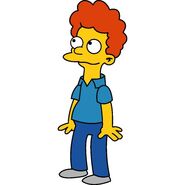 Rod Flanders on the show

One of Rod's random level up messages with Todd.
Add a photo to this gallery

Retrieved from "https://simpsonstappedout.fandom.com/wiki/Rod?oldid=245638"
Community content is available under CC-BY-SA unless otherwise noted.